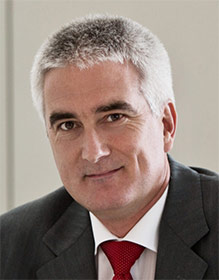 Martin Rostan studied Aerospace Engineering in Germany and in the United Kingdom and received his Diploma Degree in 1992. Subsequently he managed the international research project that developed the initial CANopen technology. From 1996 until 1998 he was marketing manager and authorised officer at Selectron. He has been with Beckhoff since 1998, first as senior product manager for Ethernet and fieldbus systems and as head of technology marketing since 2006.

Martin serves the fieldbus community on various committees: he is the executive director of the EtherCAT Technology Group, chairs the CANopen groups inside CAN in Automation and represents Beckhoff in ODVA and in several conference programme committees. He is also technical expert in ISO and IEC standardisation committees for industrial communication. With articles in magazines, textbooks, conferences and symposia he contributes to the dissemination of fieldbus and Ethernet technologies.